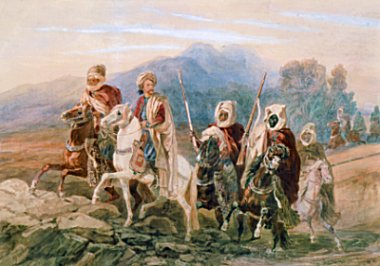 The Asil Arabian - Believe it or not!

The reports about the nature and performance of the Arabian horse often cause amazement. Whether they come to us as anecdotes, legends or personal experiences, they all agree on one thing – that the Arabian horse is a pearl of creation, that it is something unique. We have the Bedouin to thank for this outstanding breeding success.

When the Arabs sing the praises of this wonderful creature they do so with great artistry. The elegance and quick-wittedness of the rhetorical talents of the Bedouin are as outstanding as their incredible memory.

We know that the day to day work was carried out by women and slaves. The men chatted, discussed, recited, and argued, day in, day out, in their tents and whilst on the way with their camels. Thus they trained their memory and acquired an eloquence that knows no equal.

The classics of Arabian literature, the songs, the world of fairytales and legends, the poems about heroes and weddings, were the subjects of conversation, as were the genealogy of the tribe, the horses, and the camels, the experiences of the hunt with falcons and salukis, and of the ghazus (raids). This daily communication within the social group lent a transparency to their whole existence. Nothing remained secret, and each individual avoided dishonourable behaviour. The absolute truth, especially with regard to the origins of their treasured horses and camels, which formed the basis of their existence, was as compellingly demanded as was the keeping of traditions of hospitality. The law of the desert had to be observed if one did not want to be shut out of the community, and without this community there was little chance of survival in the Arabia Deserta.

Thus the following, often amazing, stories could be inserted in the other, themed, chapters since they are always based on facts, or at least have a truthful core. Or as Reich-Ranicki would say: “They are often unlikely, but always true.”