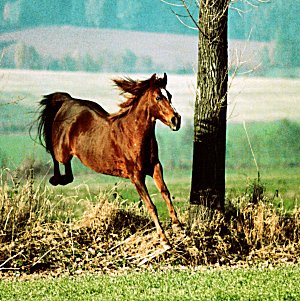 I was told that Dahabí was born in 1969, in Tal al-Kelach (where the legendary Obayan for Bábolna was purchased in 1885) with the last of the es-Sbaa. She grew up in a women's tent, alongside the children. I believe this to be true because Dahabí often came into my house and behaved herself perfectly there. She didn't knock over the chairs, she didn't eat the houseplants, and she made no mess at all. She stood quietly behind me for hours, near the bookshelves of my office, and listened to the clatter of my typewriter.

According to my blood-brother, Dahabí was Asil. She came to me from the household of a true believer, as a gift of blood-brotherhood. Because I had no understanding of the true value of such a bond, I felt the need to convince myself of Dahabí's origins. My knowledge of the phenomenon was literary, gained from books only.  Some time ago, I brought Dahabí here from Syria, by an adventurous and illegal method. I had decided to ride the remaining 580 km back to my home town, to ride it like a fleeing fugitive. My blood-brother was enthusiastic about the plan: "She is capable of galloping 300 km in 24 hours. You will not notice that she is dead tired, even if she is really five minutes from death".

The route was planned out for me in detail by local long-distance experts. They forgot, however, that a horse cannot always follow the paths one can see on a map. Thus, one evening in May 1982, we found ourselves standing on the edge of a deep canyon. A rope bridge led to the opposite side, high above a thunderous torrent. The foot-way of the bridge was made from wooden planks, spaced 40 cms apart. I did not have the courage to ride across, so I set out on foot. The mare followed without hesitation, step by step, placing her hooves carefully on the rickety, unstable planks. I felt like shouting out about the miracle I was experiencing. But there was no one for miles to hear me. We stopped in the middle of the bridge and, in my exuberance, I rocked the structure to and fro. Dahabí watched me trustingly.

Travelling 110 kilometres per day meant to be on the move for 14 hours, sometimes in the saddle, sometimes on foot. We had to cross a mountain river in flood, 20m wide and 140m deep. We climbed to 1900 ms on narrow mountain tracks. Every horse previously known to me would have long since gone off its hooves. I could now see that the ability to perform to extremes depended upon the ability of complete regeneration. During every break, Dahabí laid down and slept, even at midday, in a park in the middle of a town, so that she was able to start off "like a tiger" again thereafter.

Contrary to the belief that "noble" horses only drink the cleanest water, Dahabí drank anything vaguely resembling water in the wilderness along our route. Perhaps her instinct told her that this could be the last water she would find. Fascinated by the mare, I did the same. I wanted to turn out as tough as she was. We fed ourselves from whatever we could find on the way.

I have long held a professional interest in the communication between different species. The code of communication between rider and horse in the discipline of formal academic horsemanship was a special model for me. At the time when Dahabí was entrusted to me, I was searching for a horse of the highest intelligence. I successfully managed to develop this war-horse of the desert into a well schooled mount. I could ride her in a passage towards a landing plane, the wings would shake in the violent wind, and lead her in the deafening noise of the propeller, so she would eat titbits from the hand of the pilot, still seated in his cockpit.

Seventeen years spent living with Dahabí were an ever increasing source of joy. For her I turned a room in my farmhouse into a stable. She held a clear, and yet gentle, domination over three of my English Bullterriers that she knew one after another. She often went walking with me, in front of, not behind me, in town as well as in the countryside.

All through her life she dunged inside her "stable room", never in her paddock or even when being ridden. Also never in water, which horses often do by reflex. She could reach her stable from the paddock at any time. That she exclusively chose her stable might lead to the conclusion that she regarded dunging as an intimate affair.

As a result of her training in dressage and Haute Ecole, Dahabí became a pack of muscles, she was bursting with health. No injury ever festered, her hooves and tendons showed no problems. She died in my arms at the age of twenty-nine; a painful death caused by complications of Cushing syndrome, after the failure of ovary activity. She was infertile (sterilitas ex causa ignota), Allah probably wanted it. Dahabí was the last of her kind, a living fossil. Today there are hardly any Bedouin left in Arabia, and hardly any desert horses, in the old sense of the words.

I am the director of a stud which was founded in 1579. We have nearly 700 horses of an old and cultured breed that I treasure very much. As a stud director, I have decades of experience with horses, and you may well believe me when I say: everything important I know about hippology, nobility, character, constitution, and movement I learnt from that brave 147 cm high, eight hundredweights, Asil Arabian mare Dahabí. When asked trivial questions about the reasons behind my enthusiasm for these horses, I sometimes feel compelled to give the following trivial answer: The difference between an Asil Arabian, with the air of the desert in its lungs, and a European warmblood horse is as big as the difference between the warmblood and a cow. That is no joke, I am serious about this.