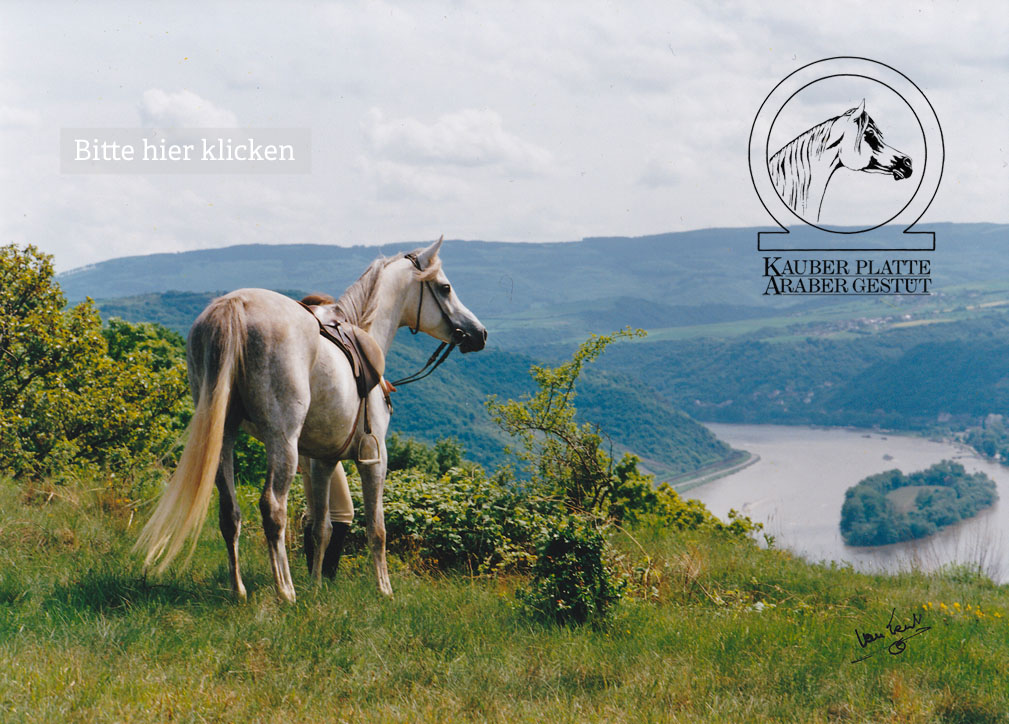 In glorious weather, we were able to spend this year's Annual General Meeting on the beautiful Kauber Platte Stud.

Our thanks go to the Buschfort family, Ms. Reinhild Moritz and Mr. Anton Baumann, who presented the impressive horses of the stud with their young helpers, commented by Landstallmeister Bert Petersen. His convincing remarks were again a lesson for breeders and those passionate about the Asil Arabain  horse. About 65 members and 30 guests rewarded the demonstrations with much applause.

After coffee, tea and cake, for which we also cordially thank the Buschfort family, we met in the hall of the Hannotts restaurants in nearby Weisel.

A warm welcome was given to those who traveled far, in particular Roger and Mimi Davis from the USA, from Switzerland, Ms. Maya Jones, Ms. Katherine Henrici and Mr. Pierre André Lehmann, Mr. Hans-Jürgen Gottet and wife, and Ms. Hylke Hettema from the Netherlands. A special greeting went to Ms. Barbara Schumacher, the author of the great book on Saudi Arabia, who then gave us a highly interesting and up-to-date presentation on the situation and the surprising changes in Saudi Arabia. With equal interest we all followed the remarks of Roger Davis, who reported on his five-month stay in Jeddah with visits to the surrounding stud farms. Mr. Belal Al Nabelsi was also warmly welcomed. He briefly reported on the situation of Asil Arabs and their breeders in Syria and was supported by Gudrun Waiditschka, who had just returned from a trip to Syria and the first Arab horse show there after the crisis.

In his annual report, the Chairman highlighted the past 12 months and gave some views on the coming year, for which another Asil Cup International is planned. We still gladly recall last year's members' meeting at Castle Bückeburg. A ceremony that could not be better imagined, at least for a general meeting, despite the absence of Arabian horses. However, we were compensated for it by the demonstrations of the Princely Riding School Bückeburg. In any case, we had a taste of the possibilities of the next Asil Cup International at Castle Bückeburg, which we are planning for the 4th to 6th of September 2020. Relevant information will be provided shortly.

The new Asil Arabian documentary, which many of us have been waiting for for a long time, was mentioned by the Chairman, who justified the delays and welcomed the significant donation. With no small pride, we can offer our new Asil Arabians volume VII with two greetings, one written by H.H. Sheikh Mansour bin Zayed, Minister for Presidential Affairs and Deputy Prime Minister of the U.A.E., the other by H.R.H. Prince Sultan bin Salman, Saudi Arabia. We congratulated His Royal Highness on his new position as President of the Saudi Space Commission. Meanwhile, the documentation has been very well received. Reports about El Zahraa, the Marbach asil lines, the challenges for Asil breeding and the use of our horses under the saddle in the various disciplines provide new topics. Positive feedback on the successful revision of the new issue came from breeders and friends from Europe, Kuwait, Saudi Arabia and the USA.

This year's WAHO conference took place near Sydney, Australia. The Asil Club was represented by our board members Mrs. Silvia Naumann and Mr. Karsten Scherling, both of whom reported on the activities of the Asil Club. Mr. Scherling also described his activities and applied for membership in the advisory Board of WAHO. We congratulate him that he is now on the WAHO advisory board.

Subsequently, Ms Hylke Hettema reported on her research on the history of the asil Arabian horse.

Then the first chairman read out the new members, whom we all warmly welcome. Ms Leah F. Dabrowski, who traveled with a friend from Italy, was especially welcomed.

We are very pleased to announce that we have more new members from Greece, Brazil and Syria. To all of you a warm welcome.

At Hannotts Restaurant where the reports were given and in the evening we had a wonderful dinner buffet/Bei Hannotts tagte die Versammlung. Am Abend wurden wir mit einem schmackhaften Buffet verwöhnt. Foto D. Olms