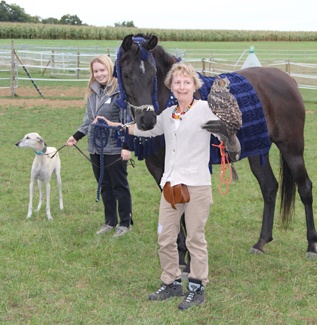 On 9 September we met for our annual general meeting at Roter Ball Arabian Stud, Röttingen, Germany, the farm of Regine Astrid, Nina, and Mark Kern. We were received with an especially warm welcome and experienced a generous and perfect hospitality. Thank you very much for all your efforts to Regine, Nina and Mark Kern. Despite the weather forecast predicting rain, more than 60 members attended the meeting and paid respect to our hosts. We all were rewarded as the rain subsided just when the meeting started and only started again at 9.30 p.m. when it was nearly over. We began with the formal proceedings, after the chairman had reported on the various activities of the past year and plans for the future. Danielle Merzbach read the auditor’s report. The auditor herself, Heike Bihler, was unable to attend, but had no complaints about the accounting.  The actions of the board and the treasurer were approved unanimously, with the members of the board abstaining from voting.

As previously announced, we are planning an Asil Club Tour to the Arabian Peninsula, since our visit to stud farms in Saudi Arabia in 2011 was such a success. The following possibilities are being discussed:

2. the Sultanate Oman, with its beautiful and varied landscapes and many purebred Arabians, but hardly any Asil horses;

The tour is planned for late October or early November 2018. January 2019 would be another possibility. We look forward to your choice (see enclosed questionnaire).

One of this year’s highlights was the HH Sheikha Lulua Asil Club Marbach Endurance Ride over 84 km being won by an asil horse, Al Najma Apoll, (winner and Best Condition also in 2016). He was bred by the Knoch family. In addition, many other asil horses have participated successfully in endurance competitions, including the German Endurance Champion 2017 over 160 km, our member Anne Wegner with her asil gelding Salamah Ibn Bint Khazzan; also horses from Nedschd Arab, the Schuster family, Ponnath Arabians, and of course Gestüt Schleehof, Silvia Naumann, and Al Azim Black Arabs, the Melzer family, as well as Dr. Daniela Schroeder were active in endurance sports.

Following a report on the 2017 WAHO Conference in Bahrain by our board member Karsten Scherling, our member Regina Staas-Werger, Ravenstable, spoke about her difficult task of preserving the endangered asil Dahmah strain of Bahrain. These horses, as well as the Saudi bloodlines at Ravenstable, are among the last Blue Star Arabians outside Bahrain. This year, her efforts paid off when she was able to present a mare from this family to the Royal Stables of Bahrain.

Dr. Astrid von Velsen-Zerweck, director of Marbach State Stud and member of the board, was unfortunately unable to attend because of foal inspections. We are grateful to state stud director Bert Petersen, who took over the commentary of the charming horses that were presented by Regine Astrid Kern and her daughter Nina. Before the actual presentation, state stud director Bert Petersen provided a lesson on the most important aspects of evaluating conformation, using the gelding Wallach Hamasa Mansour as an example. Even the more experienced breeders and friends were able to learn something new. Following this, Gudrun Irtzing presented two mares from her endurance breeding programme: GI Shafira and GI Sabaa. Both horses were shown ridden, but without saddles or bridles, controlled only by bedouin halters. The closing highlight was provided by Mara Schwarz with Hamasa Mansour, who performed circus tricks with only a knotted halter (see enclosed photo).

The Kern family provided many attractive features for the guests, including a fascinating presentation of owls and of a falcon that was set free. Visitors were enchanted by the sloughis with their charming puppies as well as by the tales of the Arab storyteller which followed the delicious oriental dinner. The final highlight of the evening was provided by a beautiful belly dancing display.

Many thanks once again to our hosts. 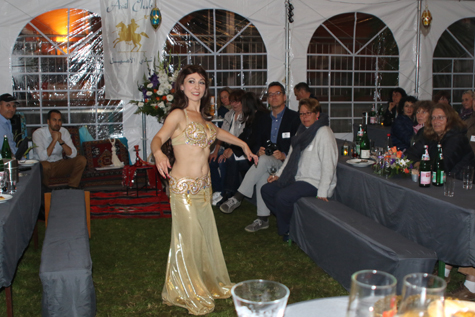