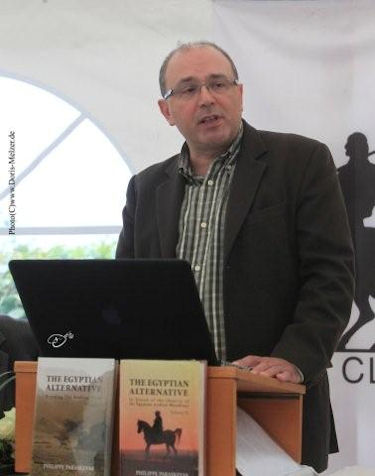 Ladies and Gentlemen, Honorable Members of the Asil Club. I am greatly honored to address your Assembly today and I thank Dr. Olms for his kind invitation to do so.

My talk to you will go beyond the presentation of a thesis or of a discussion centered around a book, even as I will naturally refer to my "Alternative" approach and point out major differences with mainstream thinking.

Having bred for 30 years safely tucked away from any market influence - and after writing two books about the ills of the market-led forces that are ruining the breed, I am now starting down the path of putting my ideas into practice - beyond the confines on my own farm. The time has now come for me to put all my energy in fulfilling my dream for the future of the Asil horse in

The Creation of a Sustainable Safe Haven for the Arabian Horse of the Desert.

In order to succeed in this difficult task, I know that I cannot act alone and I know that I need to join up with like-minded people who share my ideals and who agree, if not with every detail, then at least with the general thrust of "Alternative". Asil Club members are the first to hear about this plan, and for good reason. The Asil club is well known for being an organization that still seeks to uphold the full range of the characteristics of the Arabian: The Arabian Phenotype, the Arabian Genotype, and, most importantly, the unique inner disposition of the Arabian, the defining mental characteristics of our horse that I like to call the desert Arabian "Psychotype." Phenotype, Genotype, Psychotype, culminating into the ability to effectively perform as desert riding horses, together constitute the hallmark of the historical Arabian. "Together", is the key word here, as one set of breed characteristics will not suffice in the absence of the others.

We all know that the historical Arabian is under threat of extinction, mainly because of the ill effects of the beauty contest-like shows that so often drive the market. The market usually defines what the majority of breeders do, and the markets are not interested in the perpetuation of the Historical Arabian. They are interested in promoting whatever sells at any one point it time.

On the subject of the halter shows that underpin the market, I will not take up too much time to repeat my detailed position on the destructiveness of the ‘beauty contest’ shows, I am not here to preach to the converted. I would like however to point out the clear differences between my ‘Alternative’ approach, seeking a return to the historical Arabian of the desert, and contrast it with that of the famous proponents of the modern ‘Ideal Arabian,’ the one idealized in print by famous writers, most notably from the USA. Influential writers starting in the seventies, eighties and nineties, all the way to our day, have been busy promoting the restrictive view that phenotype is a main criterion of selection. On the other hand, coming from a different perspective, we know that Emir Abd el Kader spoke of "Degenerate" Arabians - referring to those pretty horses that lack inner quality such as courage and willingness to be of service. Needless to say, I am much more inclined to listen to Emir Abd el Kader than to any modern breeders and writers, and my own experience in breeding comforts me in this position every day.

The so-called "Ideal Arabian" approach to breeding has naturally focused attention on a handful of fashionable bloodlines. By repeatedly inbreeding these lines - and these lines alone, again and again - a fashionable new "Modern Arabian" has been developed. I trust that we all here agree that this represents an evolution, not a continuation of the Historical Arabian. Allow me to say that whether we like the modern development of the breed or not, we surely all recognize that the doctrine of "phenotype first" has led to the exclusion of valuable genetic material and that we are now confronted with a genetic bottleneck. Lack of diversity is the result. Lack of diversity is a heavy mortgage weighing on the future. The breed is now a hostage to the market forces, to the detriment of the long-term future of the breed.

To illustrate the subject, I would like to refer to some concrete examples from the RAS/EAO. I have chosen to bring up 4 historical stallions of the breed of times now past: Sameh and Seif of the Gamil el Kebir/Rabdan sire line, and Amrulla of the El Deree/Sid Abouhom sire line in addition to the world- famous Nazeer, from the Saklawi I sire line. Let me ask you then: if any of these historical stallions of the past (Seif, Sameh, Nazeer or Amrullah) were with us today, would they stand a chance, and I mean the slightest chance - in the show ring? I think not. Why not? "Not enough "Type" would be the verdict, understood to be the newfound "type" of the modern Arabian, phenotype alone. If this were not bad enough, there is worse. In many show rings, "phenotype" is basically confined to the head and neck, and the rest of the structure of the horse is not included in "type," not in any serious manner. As a consequence, the descendents of these and other similar stallions today go unused and leave no genetic print behind.

Look at their get of sire however. Sameh, that epitome of correctness, got the world of the Arabian such horses as Aseel and Sultan, to name just two eminent sires. Sultan sired Sakr, out of Enayat. Amrulla got us Akhtal, a true giant of the breed, and, without him, the El Deree sire line would have been quasi-extinct by now. Taken together, Sameh, Amrulla, but also Gassir and Seif, (the serious stallions that build for the long term but that were vilified by some writers for lacking a pretty head) were indispensible pillars of the breed in Egypt. Such was the vision of the RAS/EAO before the intrusion of the concept of the "Ideal Arabian", such was the practice of General Von Szandtner, Dr. Amin Zaher, Dr. Marsafi and Dr. Ibrahim Zaghloul. The influence of all these unfashionable stallions is, in Egypt today still, contributing substance, correctness, spirit and riding ability to the breed, mainly through their daughters and their female descendents, especially in cases where all of these bloodlines have been crossbred.

In the whole world, people recognize these horses at first glance. European breeders call it "The Egyptian look". I am sad to report that after devastating the breed in the USA and parts of Europe, and after subjecting most of the Middle East to its influence" the doctrine of the "Ideal Arabian" is now a threat to the Egyptian Arabian...in Egypt itself.

As a side effect of widespread adherence to the "Ideal Arabian" ideology, there are too many effeminate stallions today, too many faulty ones, too many structural defects, too many beauty halter champions are quite useless as riding horses, and let’s not even mention warhorses. In their pedigrees, we sometimes find almost nothing except for Nazeer, through his famous and respectable descendents. This brings us to Nazeer himself. I have dedicated a large section of Volume II of my book to the study of Nazeer and I will leave it to you to read at your leisure. As of now however, I would like to share with you one observation, one that eludes many breeders: King Nazeer was an outcross. Yes, an outcross. Nazeer was sired by a Kohailan Mimreh, who was bred to a Hadba Enzaheya mare, herself sired by a Kohailan Jellabi.

If we really love Nazeer, we should breed towards the spirit of Nazeer and a glance at his pedigree reminds us of the necessity of outcrossing in order to get anything of his stature. Admiration of Nazeer himself cannot be the reason modern day breeders are inbreeding his legacy, for Nazeer was built in a totally different way than his descendents now are. I sincerely hope that this statement is not upsetting to anyone in attendance. Let us now take this rationale one step down the line and examine the pedigree of Morafic. Just like Nazeer, just like Mansour before them, Morafic, too, was the product of an outcross. I submit that most of the giants of the breed were the product of outcrossing.

Since the market will not sustain breeders who focus on the non-fashionable lines, or encourage performance, it befalls to those of us who care about the long-term future of the breed to encourage safe havens. The EAO, as it now stands, is the world’s largest safe haven for the bloodlines that they still have. Unfortunately, the EAO is under increasing threat by influential private breeders and organizations that seek to influence its breeding decisions and who hope to make it abide by the ideology of the "Ideal Arabian". In the presence of such a serious threat, it is only prudent to think of setting up safe havens, not just in Egypt, but also all around the world. This is exactly what I plan to do, and I hope that this will be with your help and participation. Diversity must be secured now, before it becomes too late. There is another reason why safe havens are indispensable: the EAO itself only houses its own historical lines. There are however several other Asil bloodlines that still exist elsewhere and that desperately need to be preserved; think of the Zubeyni sire line, think of Maaroufa, Turfa and Wadudda tail females, to name just a few, in addition to the Bahrainis.

If we agree that these bloodlines need to be preserved, how do we set up safe havens? It is easier said than done. A safe haven can be understood to be the physical embodiment of a stud farm that breeds all the remaining Asil desert Arabian bloodlines correctly and preserves their characteristics. In our day and age however, it is unrealistic for anyone to try to house the 700/800, or perhaps even the 1000 horses necessary for such a task. If the creation of an ‘Alternative’ mega stud farm is out of the question, an alternative federation of like-minded breeders is not. It is both realistic and desirable.

The goals of my suggested federation would be for a group, you might call it an informal alliance of dedicated breeders, to agree to pool-share the endangered bloodlines and undertake to breed a number of them in the "traditional way", according to a specific modus operandi, to be further defined. Breeding according to the "Traditional Way", and without presuming to be exhaustive here, implies acceptance of the following necessary pre-conditions:

-Natural Cover should be favored. Artificial insemination is to be considered only in cases where no quality live stallion may be found. Embryo transplant should be the "tool of last resort", to be used only in exceptional circumstances.

-Horses that are not ridden and tested under the saddle should not qualify. Some exceptions may be made momentarily for the first generation of some extremely scarce bloodlines, if on the verge of extinction.

Members of this "Alternative Alliance" that I hope to establish would come from all over the world. From Egypt, from other countries, and, I sincerely hope, from Germany - and from the Asil Club.

I thank you all very much for your attention. I hope we now have time for questions and some discussion.